In 1990, I was privileged to be appointed to an advisory committee for the North Carolina Aquarium at Roanoke Island. I believe in the power of public education, and have remained with them ever since.

The North Carolina Aquariums are unique in that, North Carolina is the only state in the country to have 3 different and distinct facilities dispersed along the coast. Last week we hosted a joint advisory committee meeting, including advisors from Pine Knoll Shores and Fort Fisher. On a blustery Saturday morning, the group went to see the new Jennette’s Pier under construction. It is an amazing feat of engineering, and will be owned and operated by the North Carolina Aquariums. 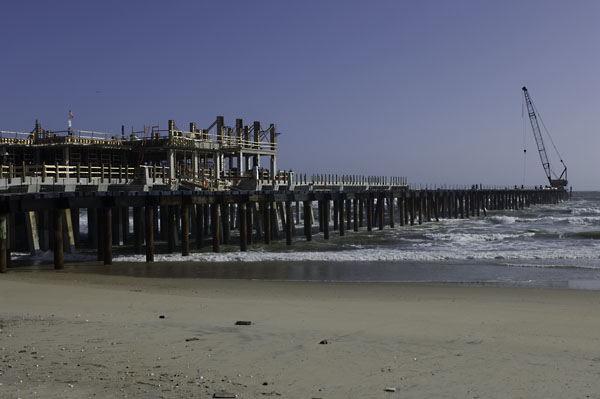 For folks that love fishing piers or aquariums, it will provide a special one-of-a-kind experience, when finished. At 1000 feet long, it will have a 2-story pier house and alternative energy support. Ground breaking was in May of 2009 and completion is scheduled for May of 2011.

More information can be found at  https://www.ncaquariums.com/ 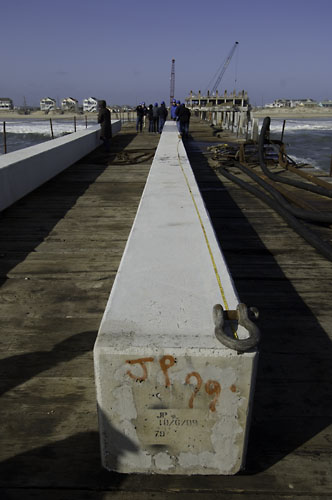 A concrete piling rests on the south trestle, ready for installation. 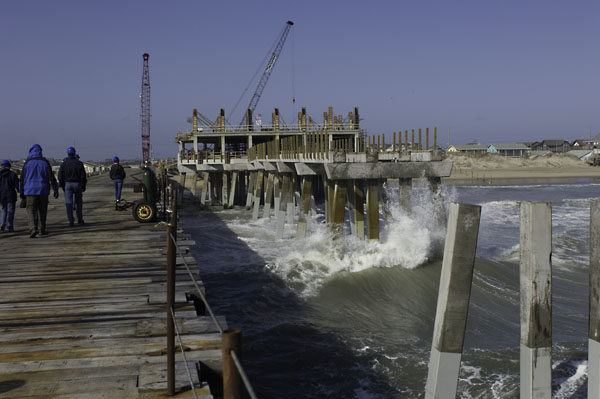 This photo shows the pier house going up and piling arrangement from the work platform, or south trestle. 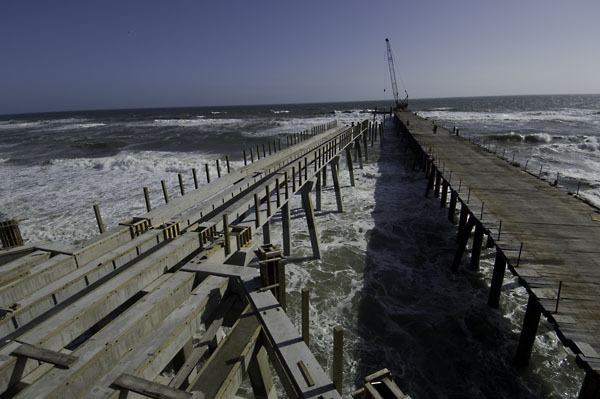 This view of the pier construction from the 2nd floor of the pier house, shows the south trestle to the right. It is a temporary work platform, and will be removed. 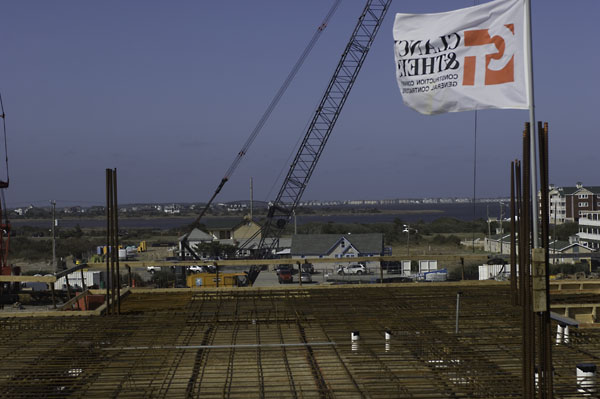 This is the view from the pier house, facing west toward Sam & Omie’s Restaurant. Beyond is the bridge to Manteo.

Often referred to as the Graveyard of the Atlantic, the ocean off the coast of the Outer Banks is  littered with hundreds, if not thousands of shipwrecks. Before modern modes of sailing, navigation and weather forecasting, commercial shipping was a more dangerous proposition than it is today.  Vessels transiting these waters however, still encounter problems.

I was reminded of this as I wrote a previous blog entry about the Sheila Rene running aground at Oregon Inlet. Similarly in October of 1977, as I was driving over the Bonner Bridge, south to Hatteras Island, I noticed a capsized trawler in the water next to the bridge. It was the fishing vessel Tosco. It was coming in the inlet with a 10,000 pound catch of flounder, when it ran aground and crashed into one of the bridge’s concrete piers. With a gaping hole in the hull, it sank right there on the spot. The boat was an estimated $100,000 loss, and the bounty of fish was also lost. 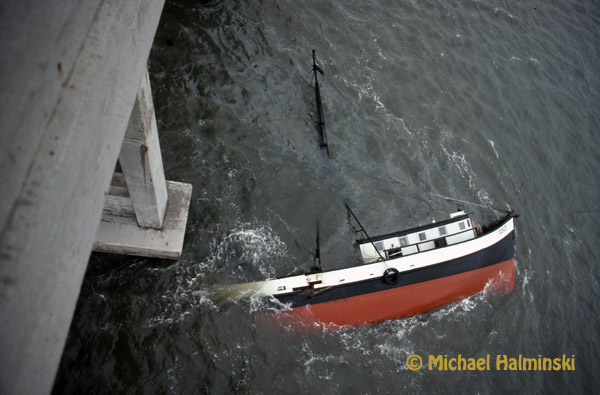 When most people think of shipwrecks along our shores, they think of the wooden sailing ships of the distant past. One of the last such wrecks was that of the GA Kohler. Built in Delaware in 1919, it was a 4-masted schooner, just over 200 feet long. Washing up in a 1933 storm, it is significant as marking the end of an era. It lay upright on the beach and was stripped in the war effort for materials, and subsequently burned. Some of the old artifacts, like wooden timbers, compass and even dinnerware, are in local homes today. The remains of the GA Kohler are currently buried beneath the beach sands near Ramp 27, but on rare occasions the remnants are uncovered by the ocean. 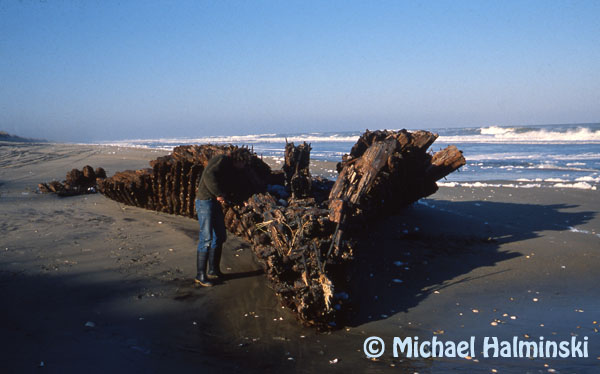 This photo from 1989 shows my friend Robin Gerald inspecting the stern section of the GA Kohler.

Since then, maritime mishaps have become less likely, and rare. Most of the activity on coastal waters nowadays pertains to sport or commercial fishing boats, and private yachts, among others.

One exceptional event though, occurred in January of 1976 . It was during a freezing northeaster. I awoke in a bitter cold mobile home and couldn’t open the north door to get out. It had been frozen shut during an ice storm. The entire north side of the trailer was coated solid with 2 inches of ice. Once I got outside, I looked toward the beach and saw a sight that I could not believe. A 500 foot World War II liberty ship, Betelgeuse was washed up and towering on the beach. The moth-balled ship was being towed by a tug offshore when the storm hit with a vengeance. The tug, unable to handle the situation was forced to cut it loose. The ship sat on the beach for over a month until salvagers managed to move it, but not before Mac Midgett tied a line to it, claiming salvage rights. It was said that he made a few thousand bucks for his effort. 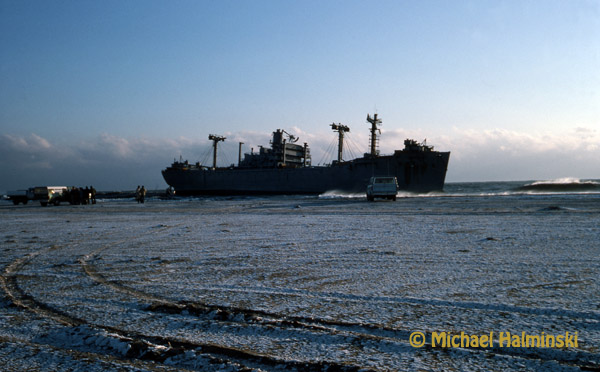 The World War II Liberty Ship washed in during an ice storm in 1976. 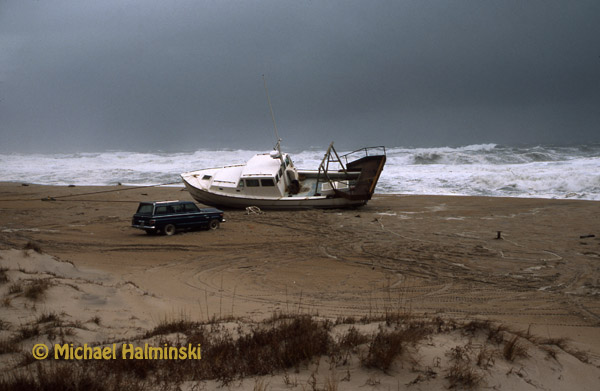 1987 was a banner year for stranded fishing boats. Here the Sweet Lady sits on the beach at Rodanthe, just yards from the pier. It was abandoned offshore during a storm as the crew evacuated via Coast Guard helicopter. It came short of hitting the pier, and was eventually salvaged. 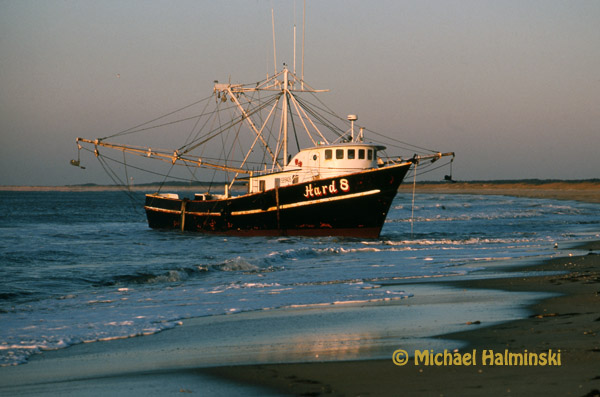 The Hard 8 came ashore in “the hook” at Cape Point that same year. 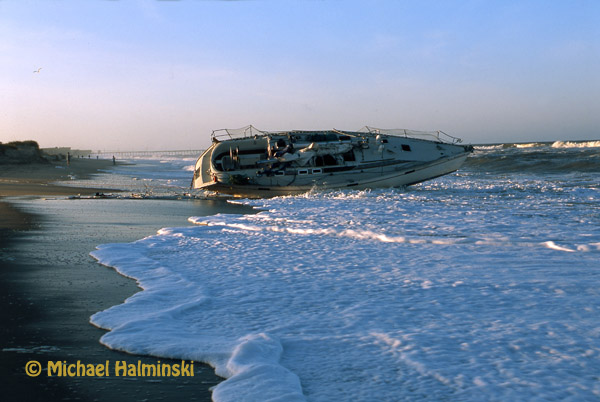 When the Miss Manhattan washed ashore in 2000, it had hit the Rodanthe pier, and was dismasted in the process. It was salvaged. 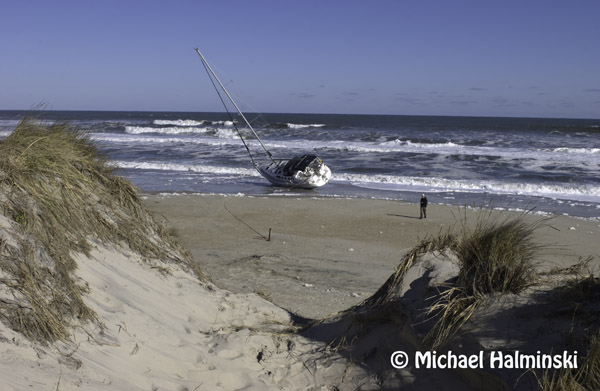 The Sly Fox came ashore on Pea Island around Christmas of 2004… not so sly any more.

They say that one problem on the water, especially during severe weather, can turn into multiple problems very quickly. With distressed vessels in the Graveyard of the Atlantic this seems to be a common denominator.