The way photography is today, you can’t believe every picture you see. Images can be enhanced or altered relatively easy. My photography has been pretty straight forward. I’ve always tried to make prints how I shot them. In the real darkroom tools were fairly limited compared to digitized versions.

Last year I had a commission to work on a book cover with the Cape Hatteras Lighthouse and Keepers Quarters as it’s main theme. It needed to look like it could have been the early 1900’s. The historical fiction book entitled Seaspell was written by local author Bronwyn Williams and published by Chapel Hill Press.

I scoured through thousands of images before I came up with a working concept. In 1996 I was using a medium format camera producing negatives measuring 2 ¼ x 2 ¾ inches. The larger negatives yielded some pretty sharp prints compared to 35mm.

The main shot I used was taken from an unusual northwest angle near the old coast guard base. Visible to the right was the original keepers quarters. To make it look more dated, I removed a utility pole, some shrubs and the boardwalk extending from the lighthouse over to the beach. 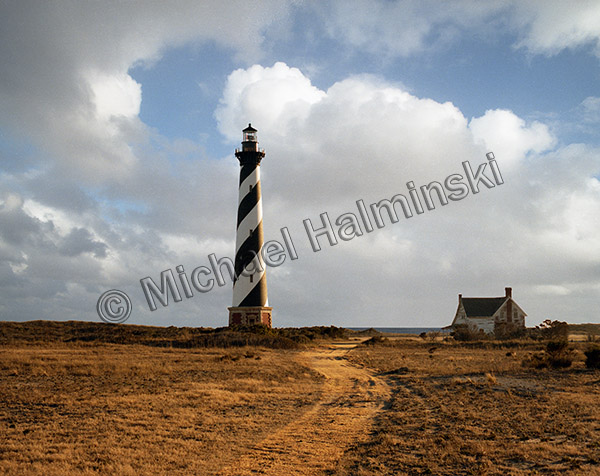 Other items needed to be added though. In the original photo, the sky was clear and featureless. I had taken another photo as Hurricane Edouard passed offshore on September 1 that same year. It showed the lighthouse from another angle, but displayed gorgeous clouds as a result of the nearby storm.

I selected those clouds and pasted them into the featureless sky, and it made a dramatic difference. To give a little more depth to the composition, a strip of blue ocean was added between the dunes from a third photograph. The publisher later added a figure walking down the path.

It took some time to throw it all together and still appear genuine, but it illustrates you just can’t believe everything you see.