The first week of August 1976, as a tropical system was approaching Hatteras, I was living in a flimsy mobile home behind the dunes in Salvo. By the 8th, the storm had developed into a major hurricane with winds peaking at 120 mph. Hurricane Belle was the first storm, since I’d moved to Hatteras Island, that had people suddenly evacuating.

My neighbors, Johnny and Linda Hooper, welcomed me into their brick home where I spent the night as the center passed within 60 miles offshore. The next day as Belle sped northward, winds shifted more westerly as huge swells poured ashore. Conditions were favorable for some great surf.

With a board and photography equipment in the microbus, I headed to the lighthouse, the only spot to handle such radical conditions. It was tumultuous and defied my skill as a surfer. Not many were able to paddle out past the giant breaking waves. Discouraged surfers washed in on the beach and only watched. Not many were successful in making waves at all. 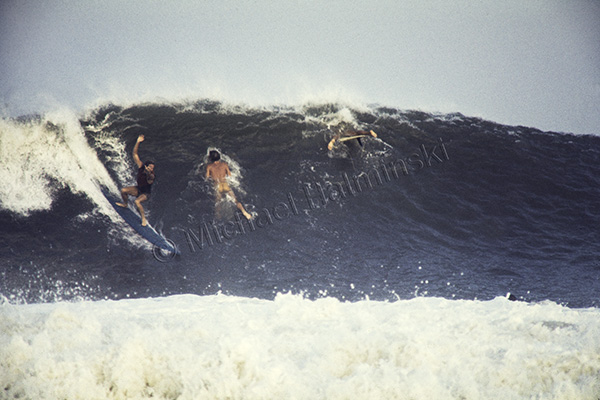 From the dunes I took a few pictures with a 650mm Century lens attached to a tripod-mounted Nikon.  The best ride I saw was when Terry Metts of Frisco, dropped in on, what some would call, a solid ten-footer. Tall and lanky, he was barely halfway down the face and it was still well over his head. He had the skill, stamina and the board to pull it off. Brian Jones also a Frisco surfer, lay prone on the face of the wave, hoping for the best, while another paddler punched through the cresting lip. It was chaotic with constant, relentless swells. By the end of the day, Belle swells were pretty much gone.