The 2018 new year came in with a cyclone. It had been nice and peaceful with the holiday season coming to a close, and everyone began bracing for a well-forecast storm.

On the evening of the 2nd it started with about 2 inches of rain, then turned to snow by 4 in the morning. By that time the barometer had plunged to 976 millibars. I don’t think I had seen that since hurricane Emily grazed by in 1993. Gusts were measured in the mid-70’s from the northwest. My house shook. We were in the middle of one of our rare blizzards. Temperatures dropped into the low 20’s then high teens at night. 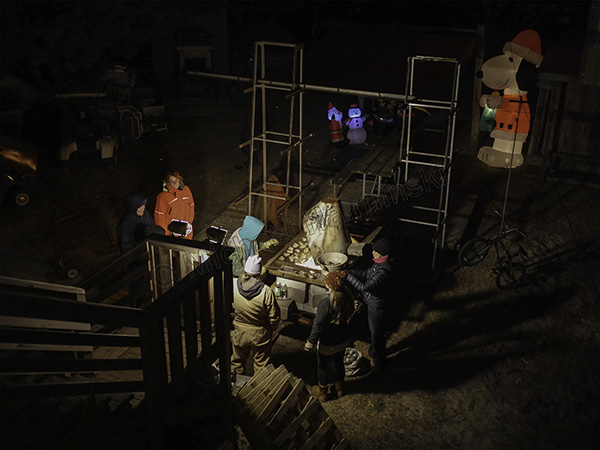 The warm up before the storm came at Eric and Val Stump’s New Years Eve party. A few snowflakes dropped as did the temperature. 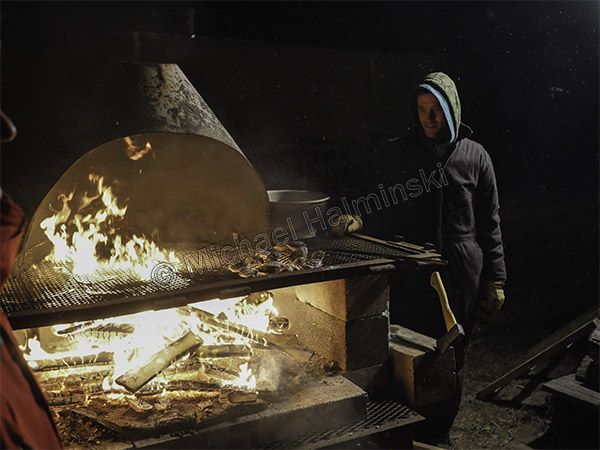 Eric did a great job roasting some crab slough oysters.

Then on the morning of the 3rd, I saw my truck sprayed with icy snow. 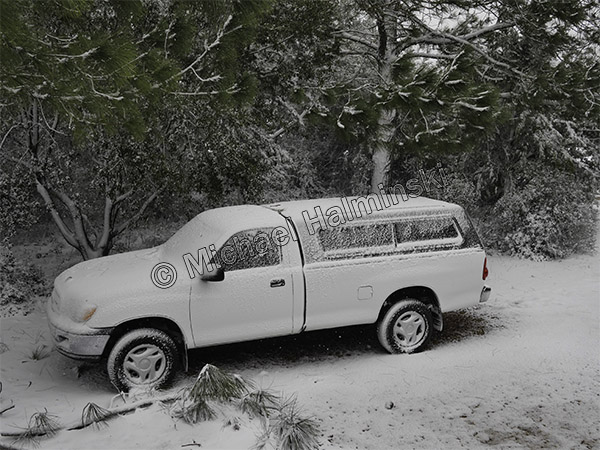 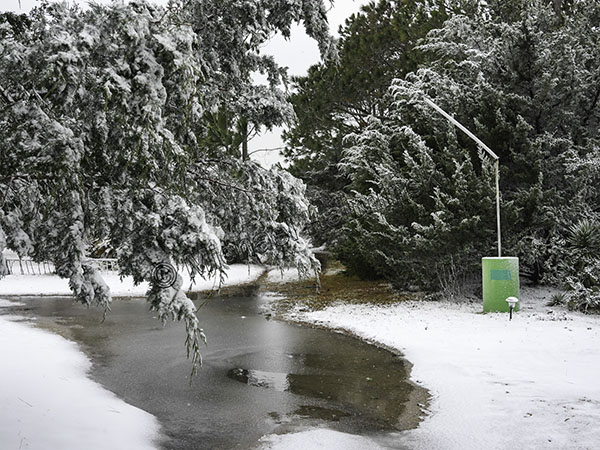 My business banner had been blown away and it’s mast bent. 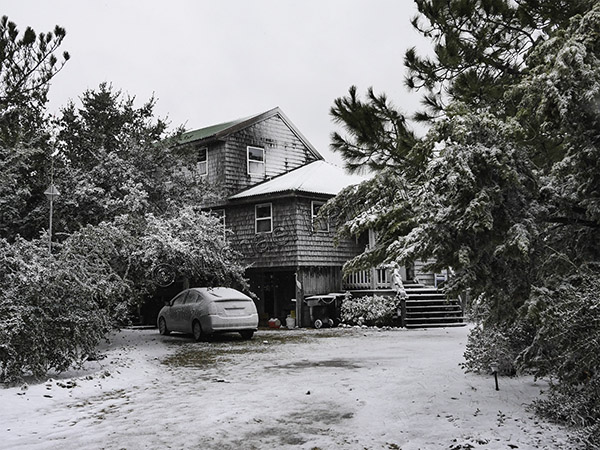 After snowing 3 inches, it was 25° and blowing a gale. 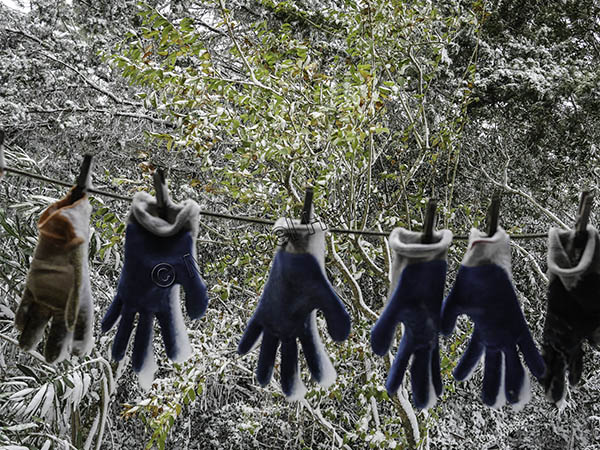 Oyster gloves were frozen to the clothes line. 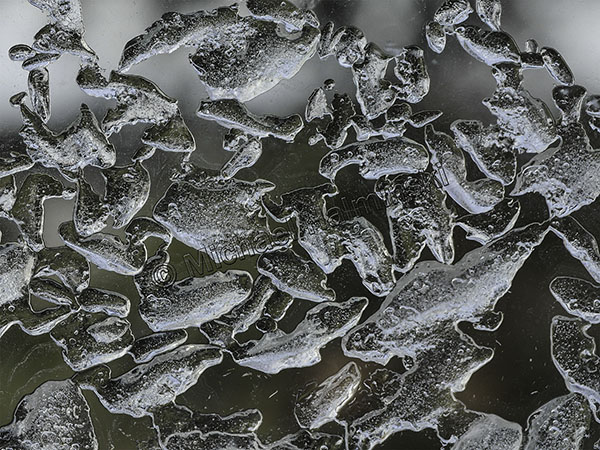 My bathroom window had some interesting ice patterns on it. 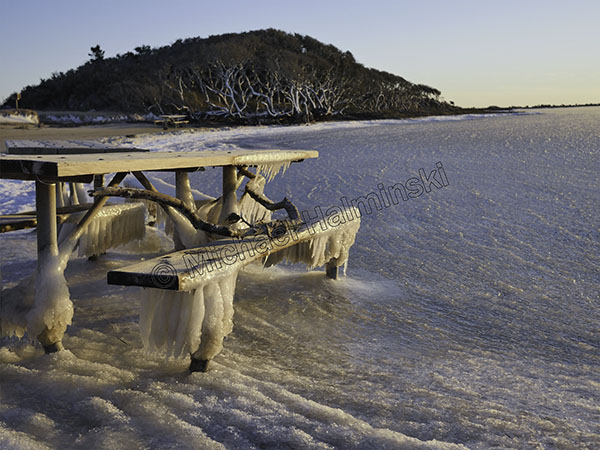 Bundled up for the coldest conditions, I explored the Salvo Day Use Area. 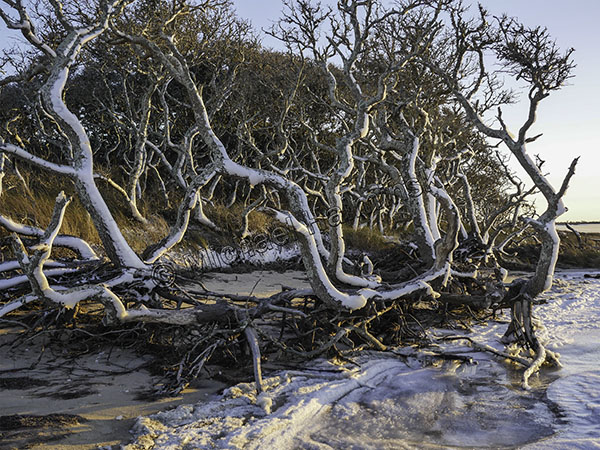 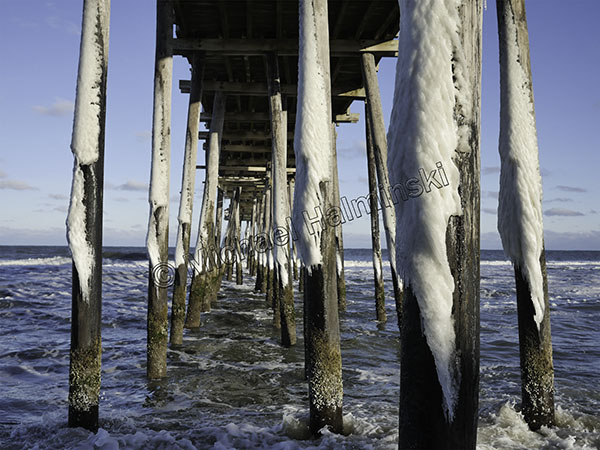 The Rodanthe Pier pilings were plastered on the northwest sides. 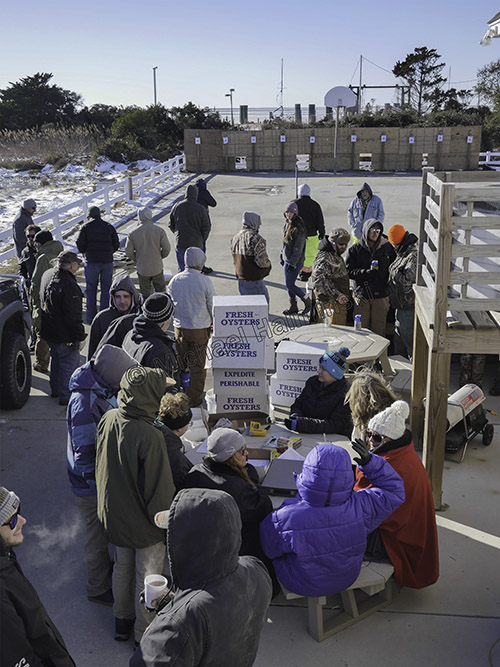 Meanwhile the oyster shoot for Old Christmas had begun. It was low 20’s with a stiff northerly wind.

Everyone was gathering on the lee side of the Community Building, unless they were shooting. 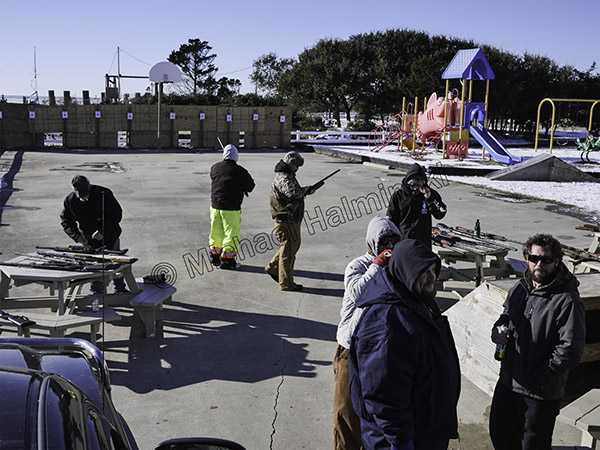 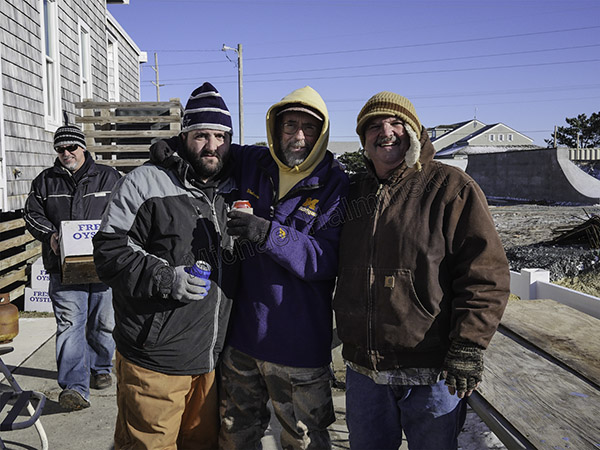 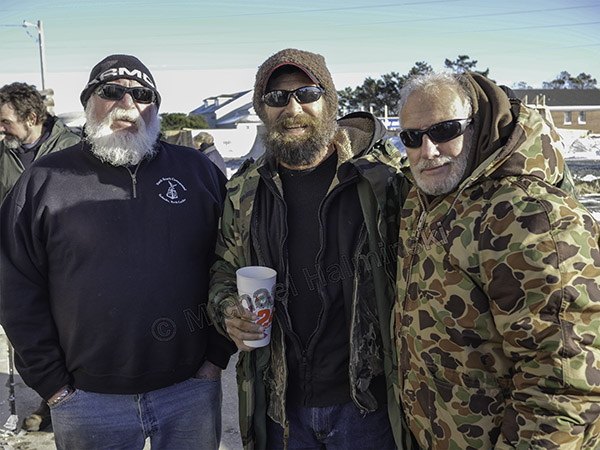 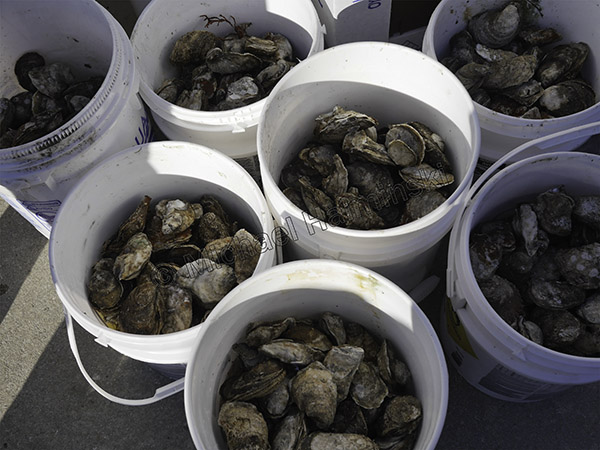 To the victor of the oyster shoot go the spoils. Better eat ’em quick before they freeze. 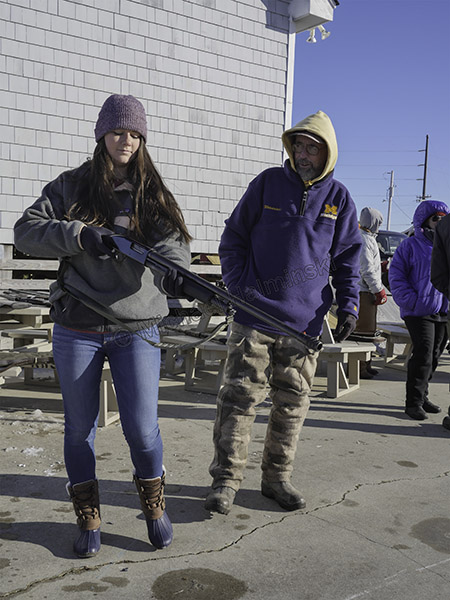 Emily prepares to shoot as her dad Tom Wiley looks on. As is a proud family tradition here, she serves in the U.S. Coast Guard. 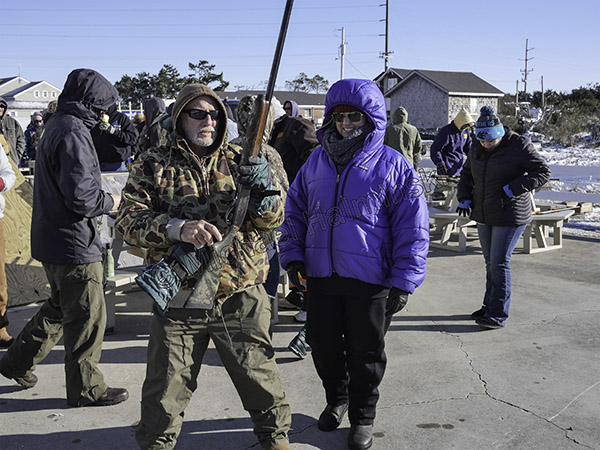 Larry Midgett was helping his daughter Tanya, get ready for her turn to shoot. Tanya is also following in the U.S. Coast Guard tradition, and currently stationed at Hatteras Inlet. 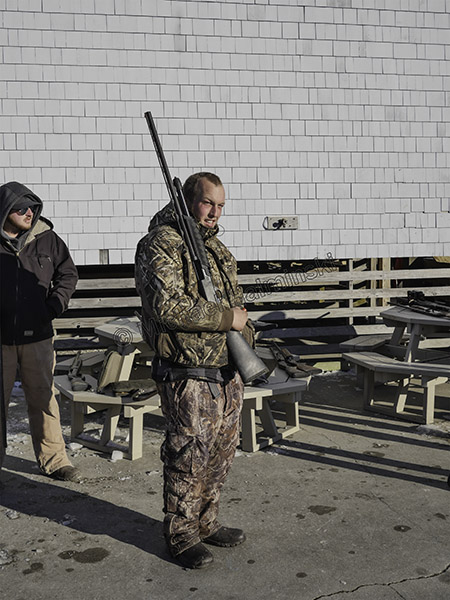 There was always someone waiting to shoot. 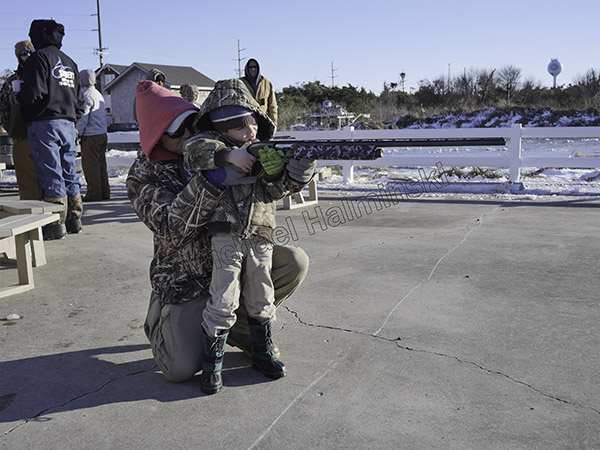 Even the young ones got in on the act. Camouflage was everywhere. 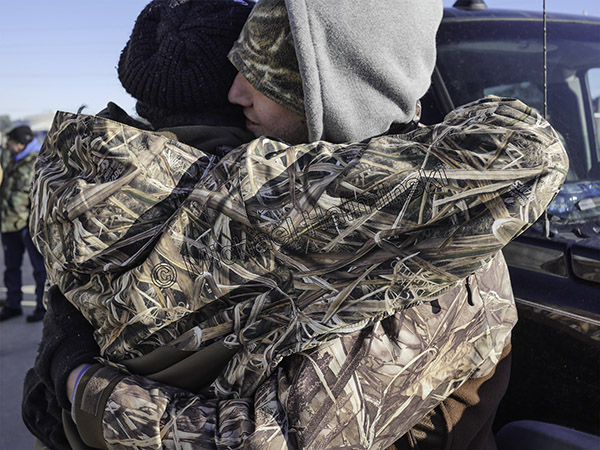 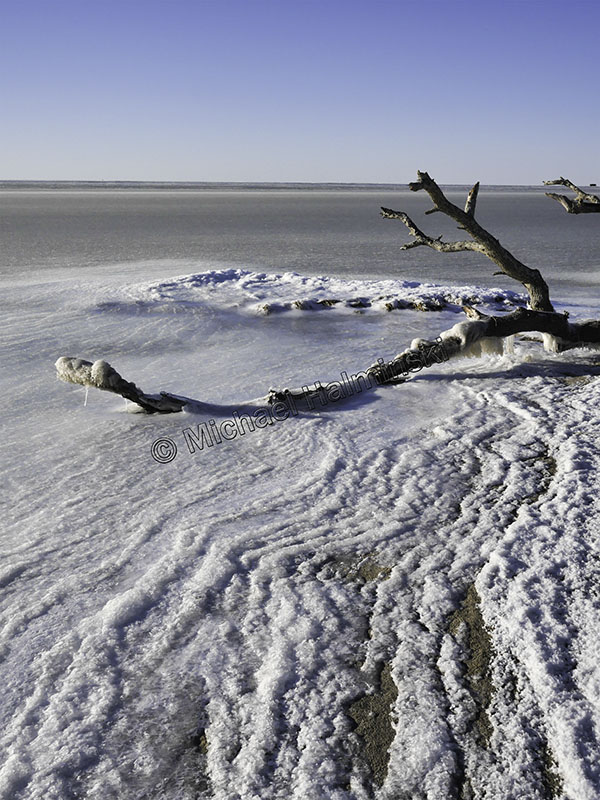 The next day frigid temperatures continued. It was 17° at night, and the sound froze out even further, as far as I could see. 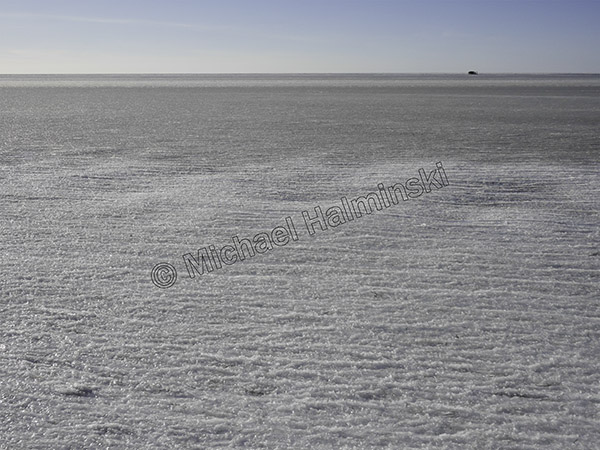 From a second story deck, I couldn’t see any open water, only a duck blind on the horizon. 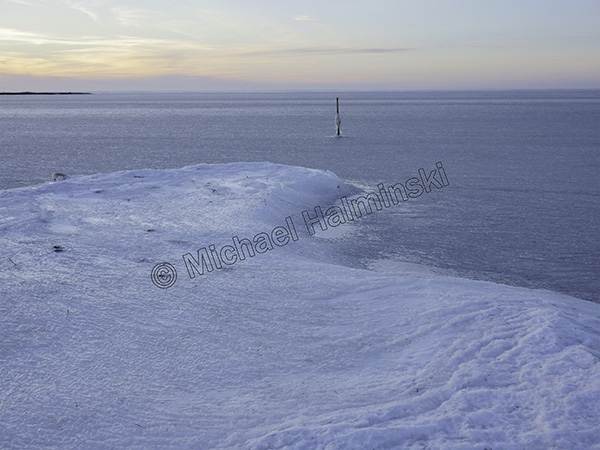 Behind my house the sound was solid. I heard some kids in Salvo rode their bikes on it. 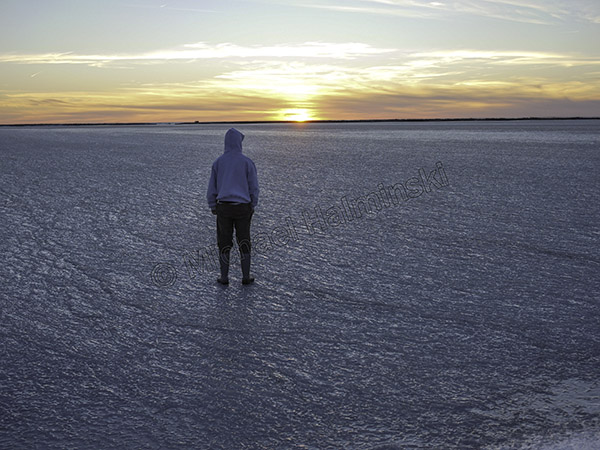 Jon Brown and I marveled at the spectacle. It happens, but not often.