Conditions around town have been improving as each day passes. The new temporary bridge at Pea Island is nearly complete, and the island may reopen as early as next Tuesday.

This is great news, however the night before last, there was a terrible mishap. We learned that Gary Midgett was killed in a tragic accident on highway 12.

Gary was Mac Midgett’s nephew, and a common sight around his family’s business,  the Island Convenience store and garage. He was an island boy, through and through. Gary was actively involved in the clean up process, driving around in his heavy equipment, and hauling off debris.

His mother, Mildred, had her house flooded in the hurricane, so he was putting up his family in his own home. So not only did his mother loose the use of her home, but in all this turmoil, she has also lost a cherished son. 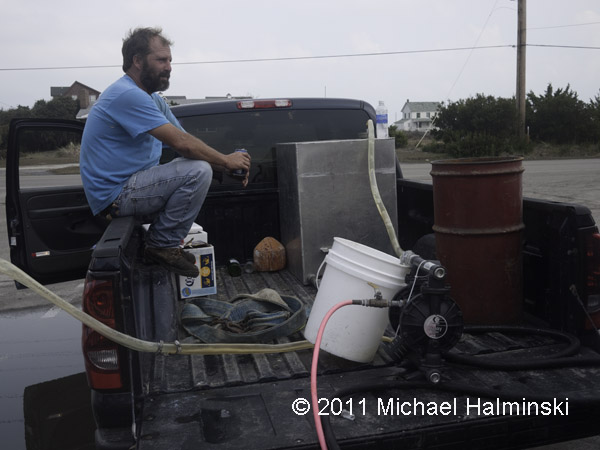 I made this photograph just days after the storm. Gary was manually pumping fuel out of the underground storage tank, so that others could get gas for their vehicles and generators.

Rest in peace Gary Midgett. You will be missed by many.