Two weeks ago Elsie Hooper’s house was torn down. It was a relic of a home. Her husband Les passed away several years ago. He had told his children when they were growing up, decades ago in that same building, that the original part of the house was well over a hundred years old.

On the morning of February 1, a demolition crew arrived, to take down the house that had survived a multitude of storms, and had sheltered generations of family. When Les and Elsie married, they bought the old house from a nearby property, and with the help of neighbors rolled it to the location where they would raise their family. I suspect much of the house was built with hand tools, and as years passed and the family grew, it was added on to accommodate them.

Elsie and her grand daughter Amanda, take a last look at the interior of a home that housed love and memories. 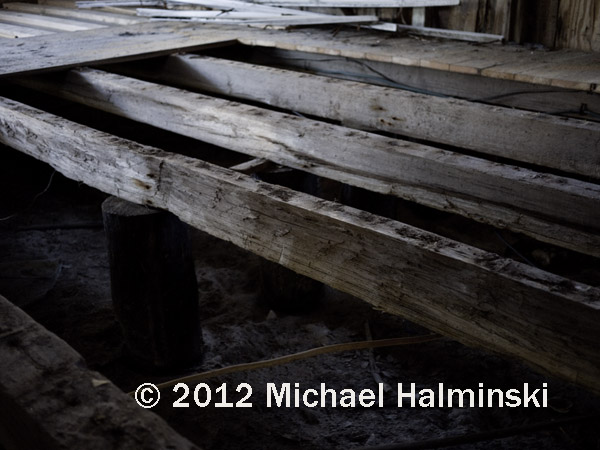 Hand hewn beams supported a floor in the original part of the home. 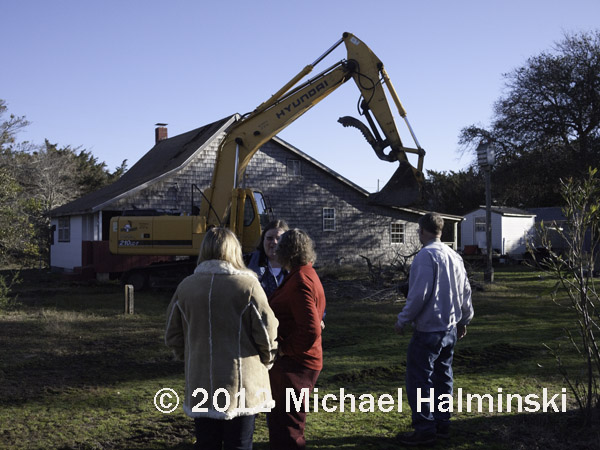 Two of Elsie’s children and granddaughter came to lend some emotional support for an ordeal that must have been very difficult. 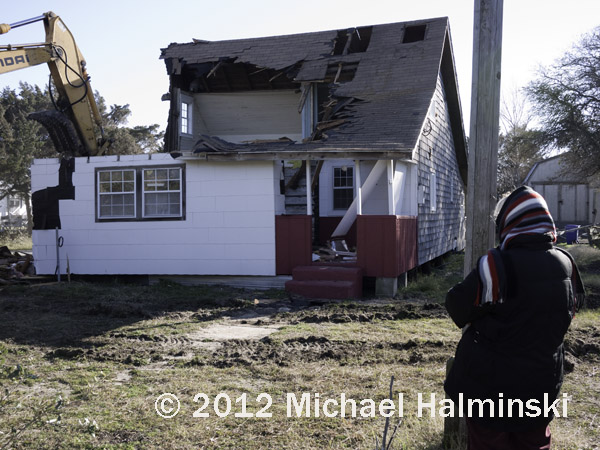 Well into the demolition, I can only imagine what was going on in Miss Elsie’s thoughts. Her past hopes, dreams and memories going into a pile of rubble. The heartfelt values of any thing left are intangible and within her soul. 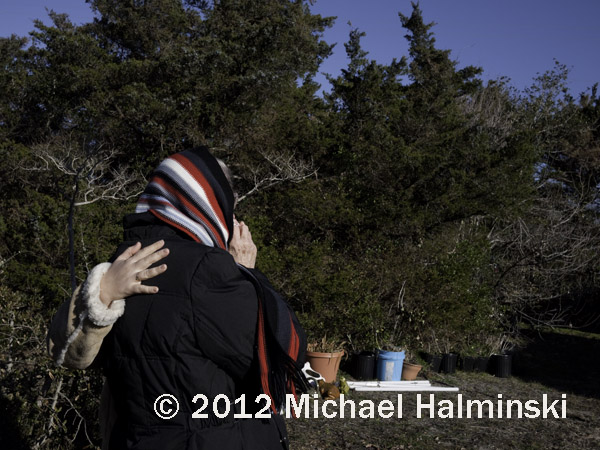 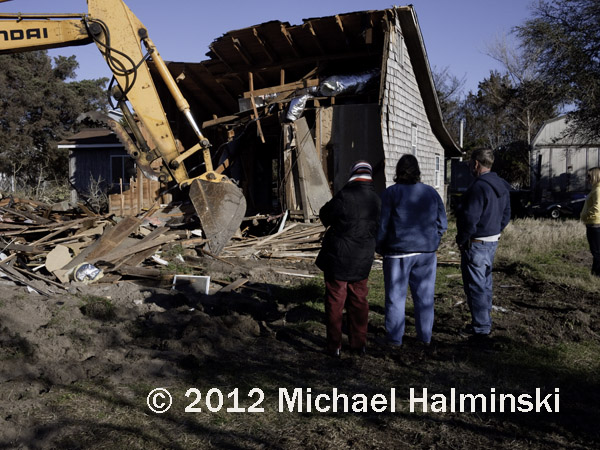 Elsie looks on with daughter Sharon, and son Jimmie. Nothing could prepare you for something like this, yet I was amazed at their resolve and strength. 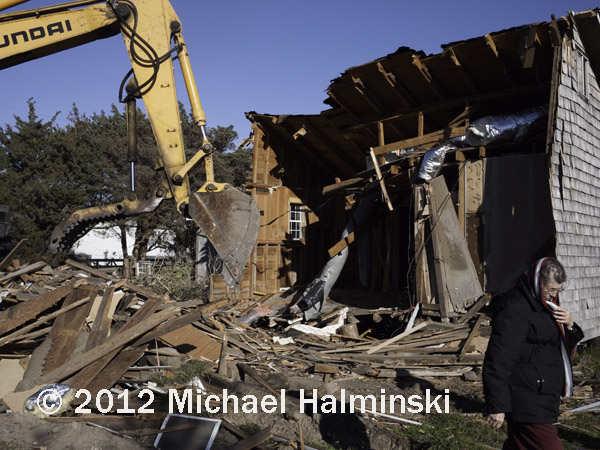 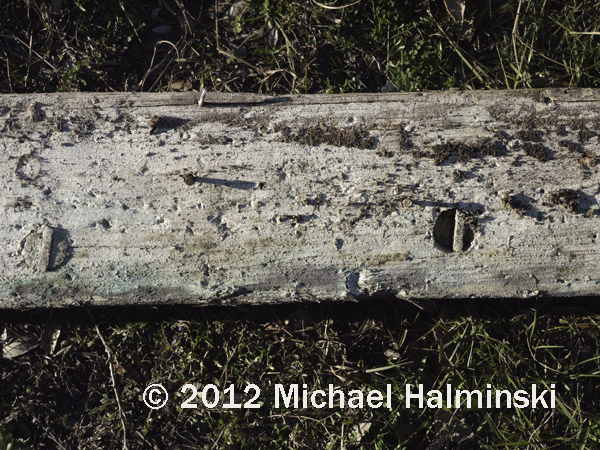 A few things were saved, like this beam taken from a shipwreck. 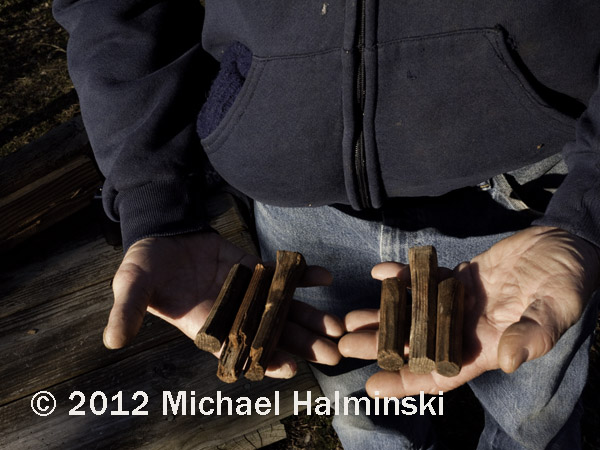 Jimmie Hooper holds some of the hand carved wooden pegs that held the roof rafters together. He plans to make a coat rack with them, for the new home that he’ll build for his mother. 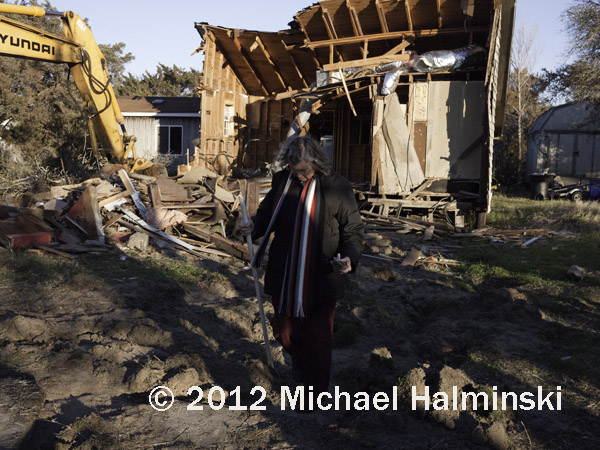 Miss Elsie combs the ground for anything that will give her good memories. Knowing my affinity for oyster shells, she dug some up from around the house and handed them to me. She mentioned that she and Les had shucked and eaten many big oysters there. 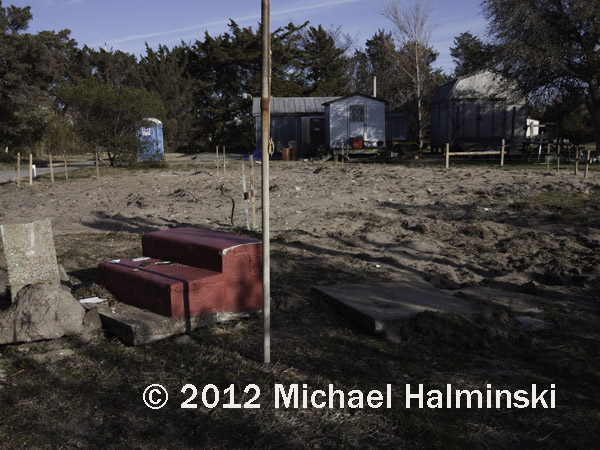 Elsie’s new house will be built on the same spot as the old home. The concrete walk ways from the old house were once part of the long-gone Gull Shoal Coast Guard Station. They will be reused for the new house.

Considering the predictions of rising sea level and potential of future storms, I would venture to say that this new home may not have quite the longevity as the old one.