We hear a lot about Oregon Inlet, and the bridge spanning it. Nowadays you can hardly talk about one without mentioning the other. It’s nothing new and has been an issue for a long time.

When I first came here, driving over that beautifully curved bridge across the inlet was an awesome experience, the vistas remarkable. It was sort of an environmental work of art that served a purpose, getting to and from Hatteras Island. I would eventually learn that it was a bit more than that. 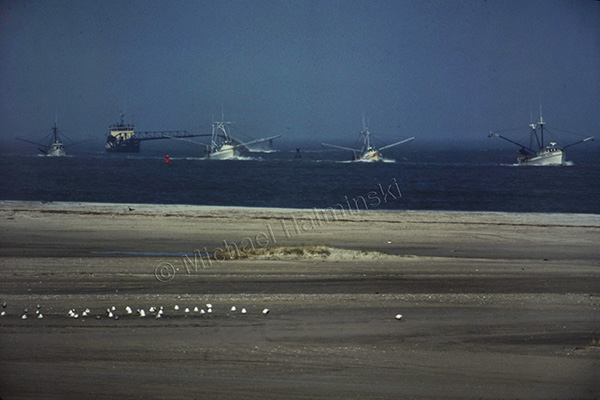 In April of 1977, while driving to Nags Head, I watched 4 trawlers coming in through the well-marked channel. There was no traffic and I had just gone over the peak of the bridge. I stopped overlooking Bodie Island spit, got out and took one shot with a 400mm lens on a fairly new Nikon F2. 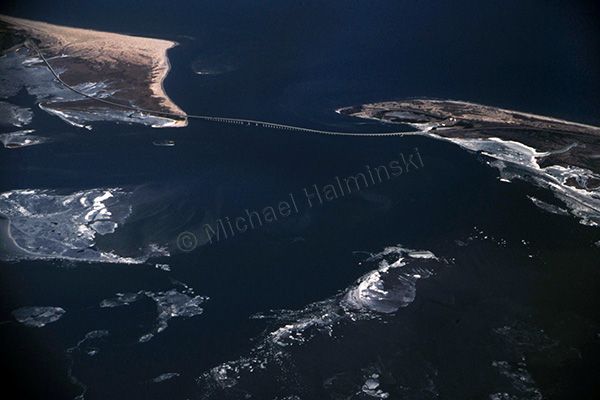 In January of 1985, we had a severe cold snap. Temperatures were low enough to freeze portions of the Pamlico Sound. I was so impressed that I hired a pilot to take me up and shoot the ice flows from above. We ascended to 7,000 feet, and the view was spectacular.

December of that same year, I was shooting a story on commercial fishing for Outer Banks Magazine. Arrangements were made for me to spend 3 days on a trawler from Wanchese, where Captain Terry Saunders welcomed me aboard the “Richard Wayne”. There were 2 days of fair weather, but when a northeaster set in on the third day, the boats decided to come in early. Crossing the bar at the mouth of the inlet was rough, and Captain Stevie Daniels maneuvered “Bailey Boy”  through, right behind us.

I flew during a northeaster in 1989 and made shots along Hatteras Island. There was no jetty in place at the inlet yet, and the Coast Guard Station was beginning to wash away. At the time, they were abandoning the station and moving to a newly built facility on the north side, next to the Oregon Inlet Fishing Center.

No recollections of Oregon Inlet would be complete without mentioning the October 1990 incident of a dredge taking out 400 feet of Bonner Bridge. I made this shot that December riding the ferry across the inlet when repairs were being made. 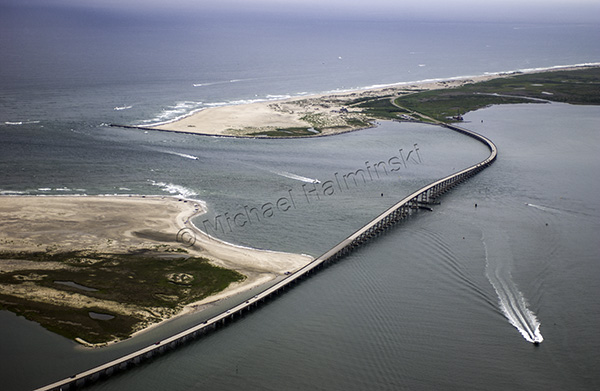 On an overcast September day in 2005, I went airborne with a videographer shooting a documentary on rising sea level. The section of the bridge that was taken out in 1990 is noticeable as a darker shade of gray in the pavement. 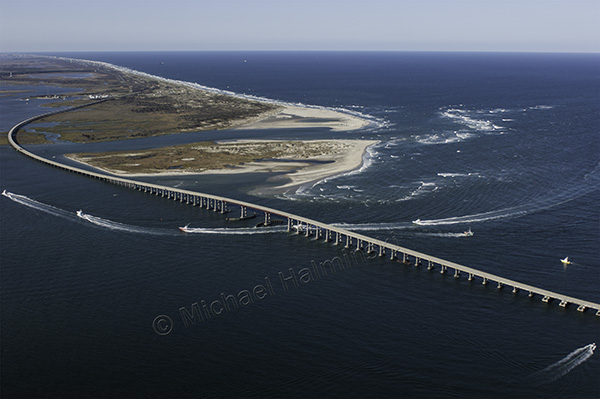 The only inlet on the east coast facing northeast, Oregon Inlet was originally formed in 1846. Since then, it has migrated over 2 miles south. Watching the area change and shift over the years continues to be fascinating. It’s a display of man’s engineering prowess in the face of some of nature’s most powerful forces. It’s also very expensive.