Continued from previous entry dated May 4, 2015…

What seemed a scavenger hunt, we knew we were headed in the right direction. Journal entries confirmed a place at the end of the road, near Ke’e Beach. There were references to an area revered by Hawaiians. Known as a Heiau (hey ow), locals told us it was next to the trailhead for the Na Pali Coast, at end of the road. 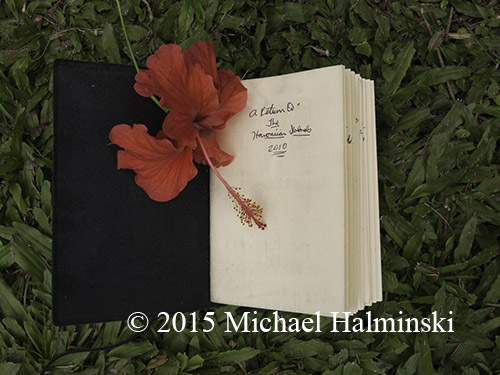 Robin’s leather-bound journal from 2010 was the key. 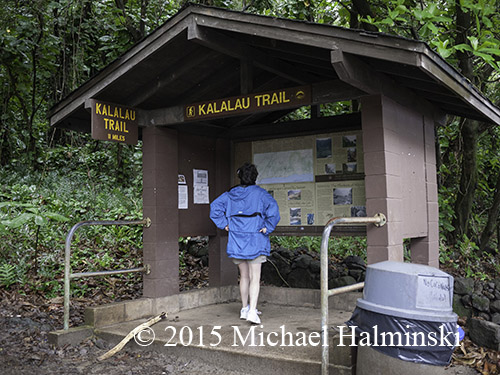 The trail entrance to Na Pali is at the end of the road. 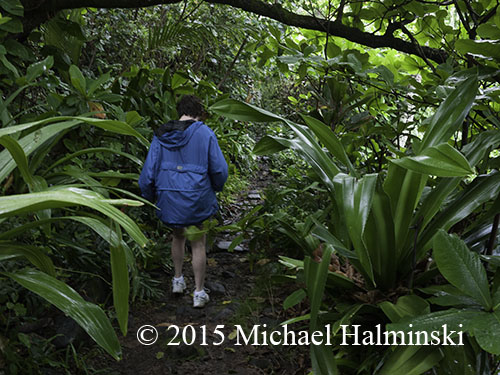 We found an overgrown path and walked through lush vegetation. 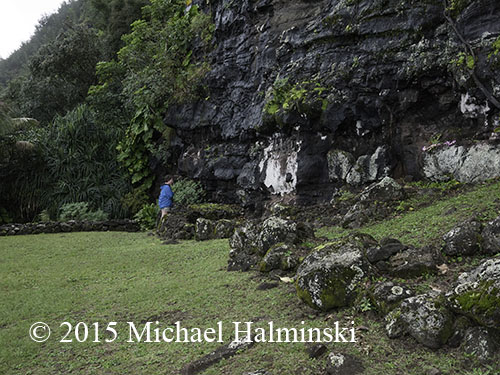 Approaching a rock wall, I felt elation, and knew this was the right place. The view was remarkable and whales spouted offshore. What an affirmation! Robin’s descriptions, photos and journal entries were a perfect match. 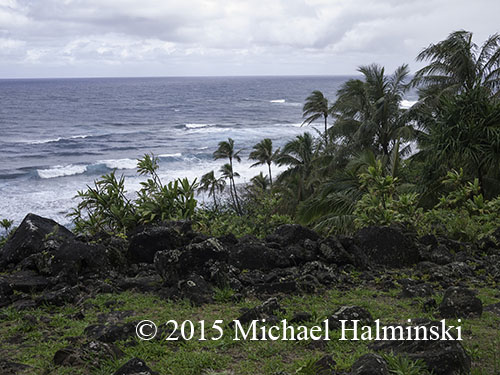 Stones were laid in an orderly fashion by ancient Hawaiians. The site was a temple and served as a school for the Hula. Students would come from surrounding islands. It is said that the goddess Pele came here from the big island after hearing the drum beats. 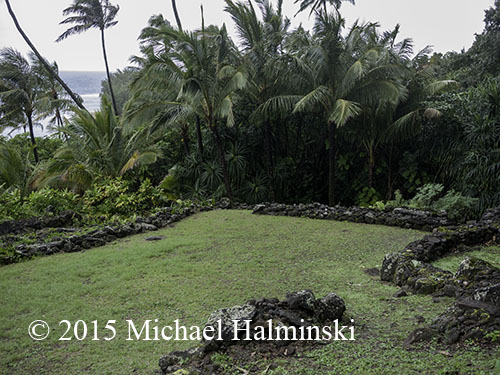 I tried to imagine what was here hundreds of years ago. 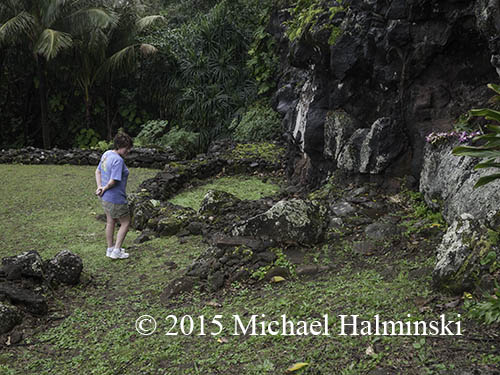 There could have been thatched structures and large carved Tikis. 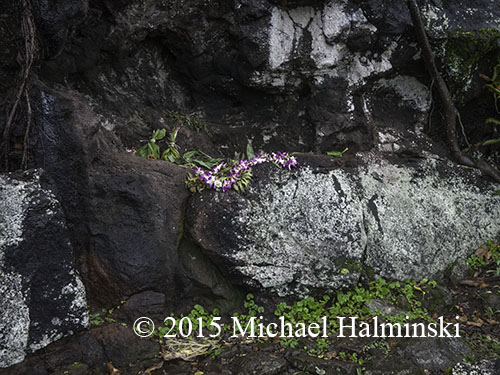 A shelf in the rock wall looked like an altar where ceremonies could have taken place. 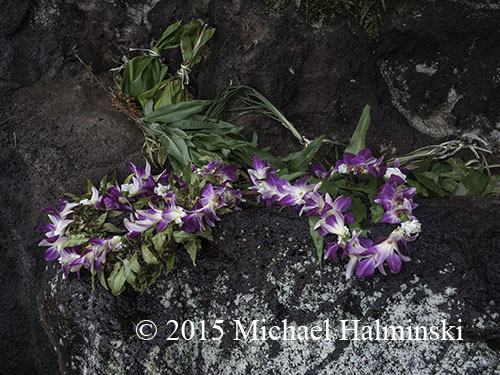 Someone left offerings wrapped in Ti leaves and a beautiful flowered lei. 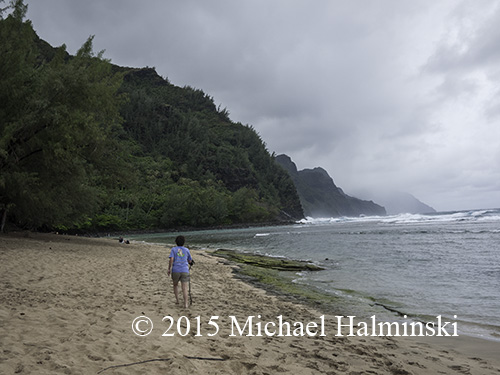 After finding the location of the Heiau, we explored the beach at Ke’e. 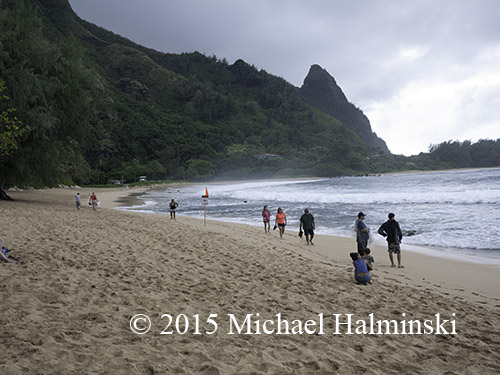 Ha’ena State Park is next to Ke’e. 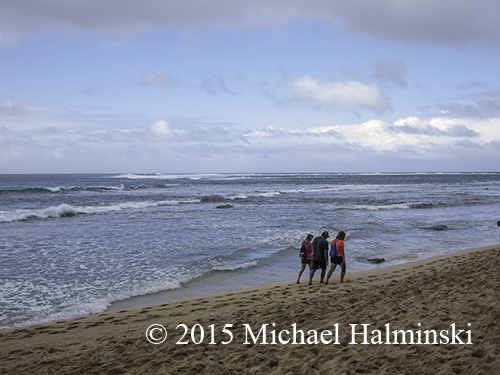 The waves at Tunnels were big and breaking on the distant reef. 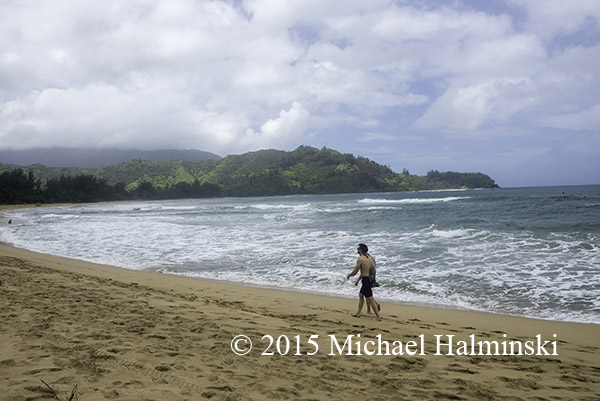 We spent some time on the wide crescent beach at Hanalei. 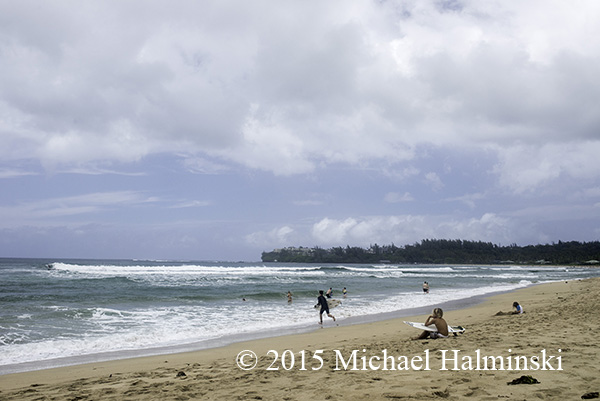 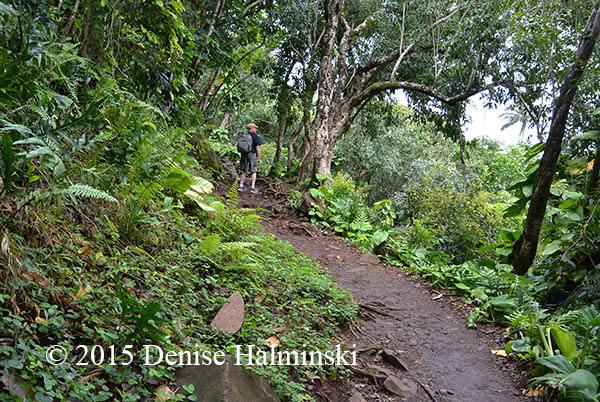 The following day we began hiking the Kalalau Trail.

There were torrents everywhere. 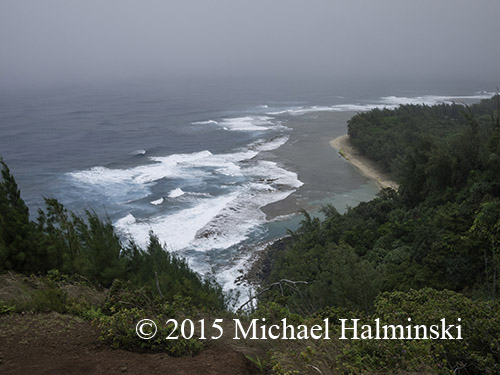 The first overlook gave a spectacular view of Ke’e Beach. 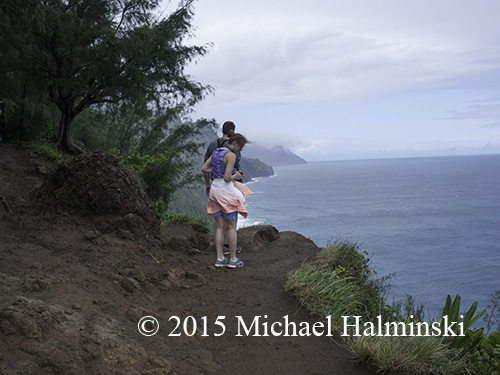 At times the steep drop-offs were precariously close to the trail. 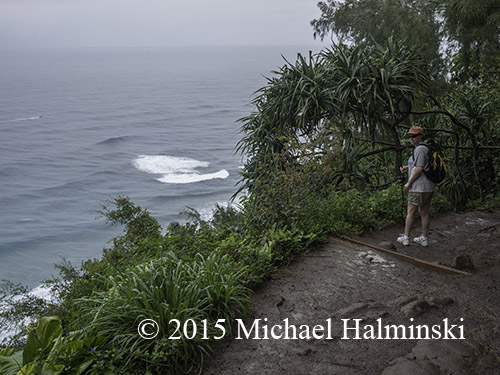 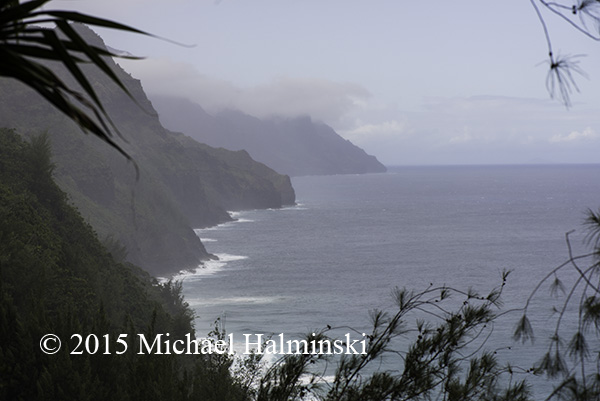 In a heavy downpour it got so muddy, we had to turn back after going in ¾ mile. 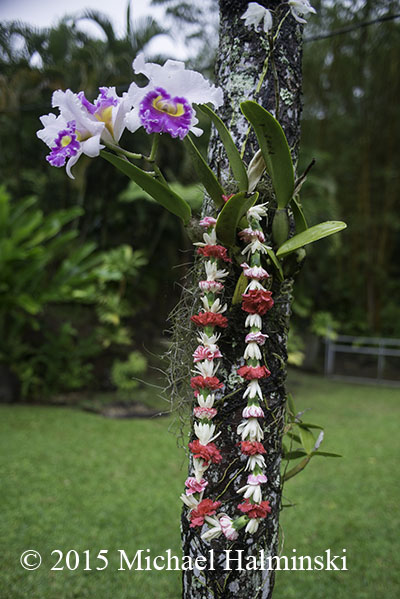 On the way back to our cottage, a man on the roadside sold us a lei made by his wife. 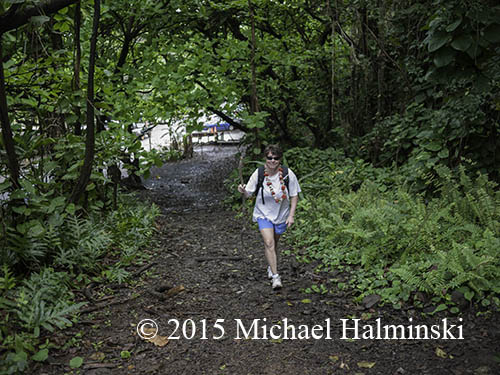 Early next morning we went to the Heiau with Robin’s ashes. 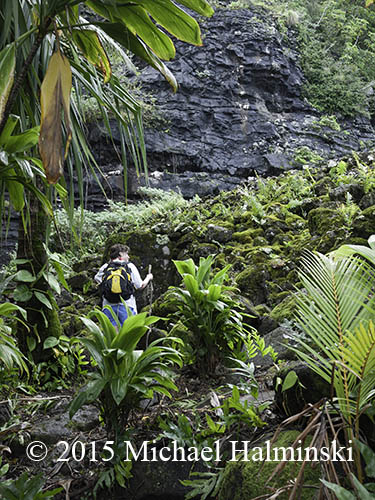 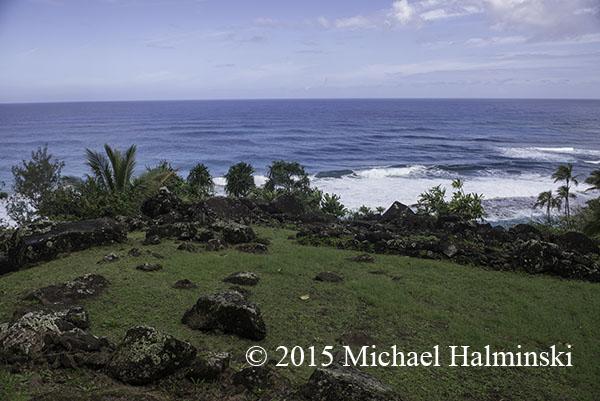 It was a spectacular day, and a few whales breached from the ocean. 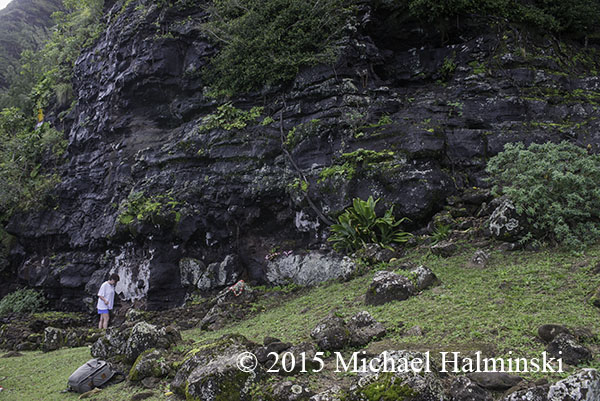 We spent an hour contemplating the moment, and the sacredness of the site. 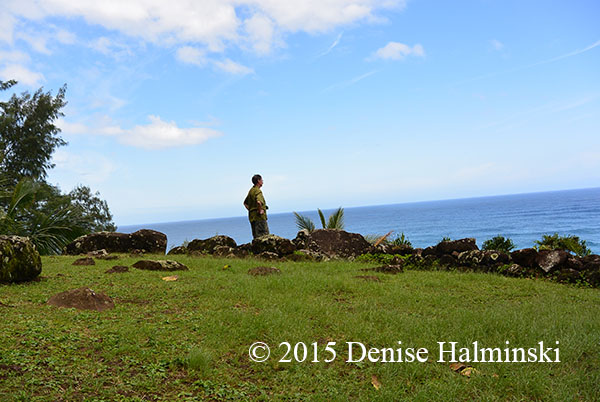 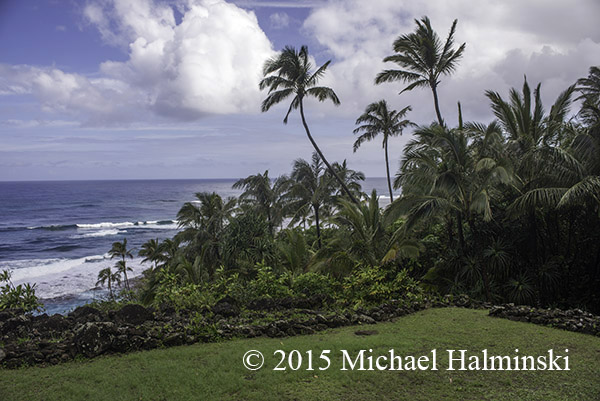 We placed the ashes up against a sheer rock wall, splashed an offering of Hawaiian rum and presented the lei. 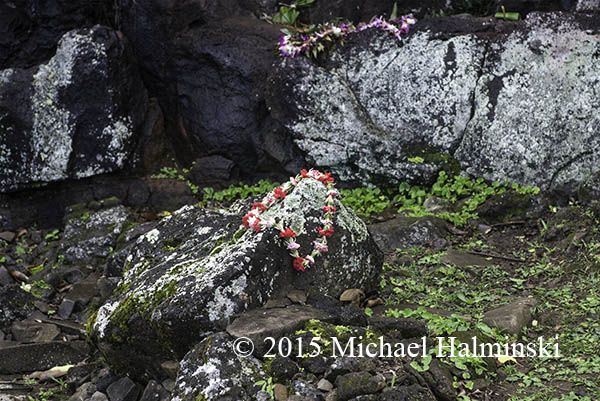 Our task was done.