I grew up in a Navy family that traveled to new tours of duty every couple of years. Many of those stations required transportation in propeller powered military aircraft. So my fascination for flight began at an early age. I always wanted the window seat. As a nine year old, I distinctly remember flying across the Pacific Ocean to the island of Guam. How I loved peering out of the window at the ocean and islands below!

Today I still hold that same fascination for flight with aerial photography. After Hurricane Isabel in 2003, I made seven flights over Hatteras, Ocracoke and Portsmouth Islands. I wasn’t interested in the destructive power of the storm. Instead I wanted to see and document how nature constantly shapes the Outer Banks.

Last year, parts of the beaches of our National Seashore Park were closed due to bird nesting, including the Cape Point of Hatteras Island. I’ve photographed the Point from the air before, but only with off-road vehicles on it. My intention last Summer was to fly and shoot it’s more natural, pristine state, but I procrastinated and suddenly the point was opened to traffic and I missed my chance.

This year I put it off again until July 26th when I called my good friend and pilot Dwight Burrus. Dwight and his wife Debbie operate Burrus Flying Service out of Billy Mitchell Airport in Frisco. I’ve flown in his beautiful red and white 1971 Cessna on numerous occasions, and I can’t say enough about his expertise. I tell him what I’m looking for and he takes me there, every time. It’s almost as if I’m flying the plane myself. Dwight was raised on Hatteras, and knows the coast and it’s steeped history well. I highly recommend the tours of Burrus Flying Service. Call them at (252) 986-2679 or visit the web site for more information. Tell them I sent you.

Let me show you what I saw on this latest flight, looking down on the scenery below. 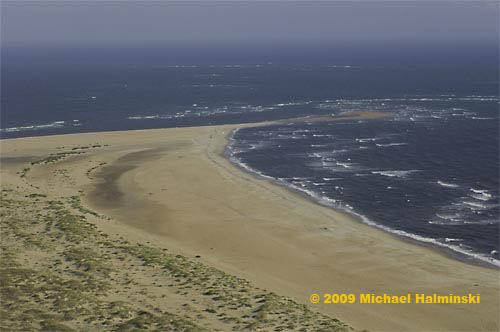 Looking out to Cape Point from the south or “the hook” side. 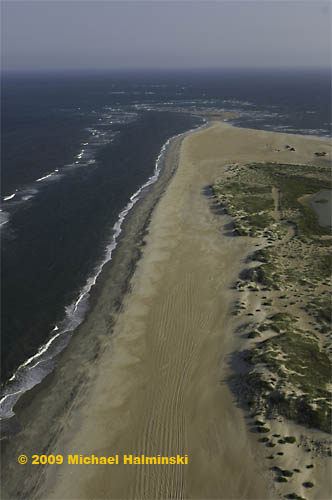 Looking toward the point from the north beach. 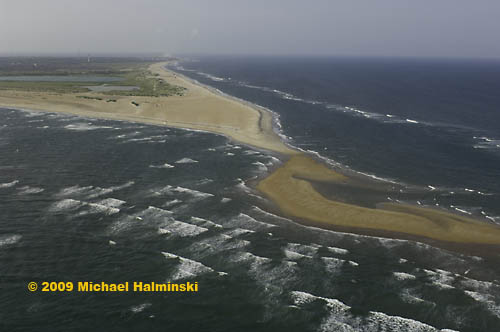 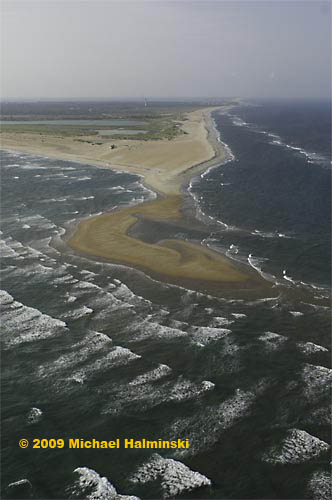 Looking toward the Cape Hatteras Lighthouse from over the Point. 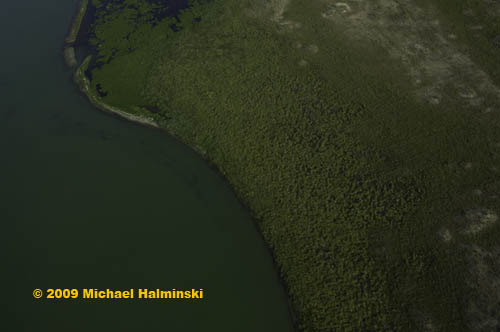 The shoreline of the pond at Cape Point. 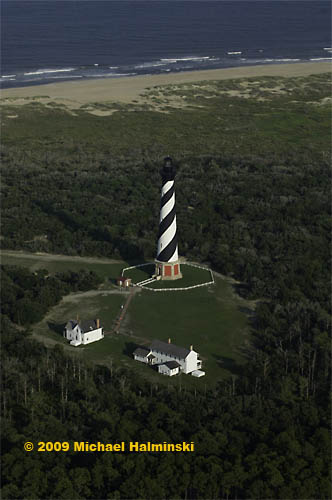 No flight is complete without a lighthouse fly-by. 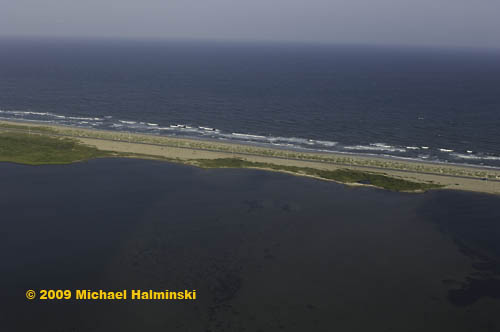 This is the site of the inlet that was cut by Hurricane Isabel. 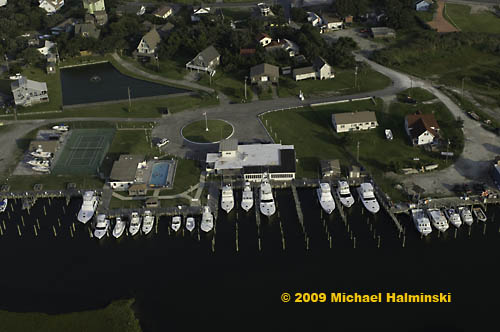 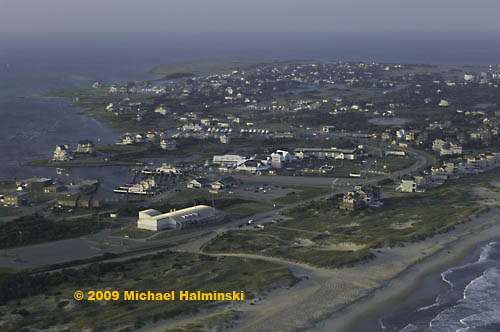 The south end of Hatteras Village at the ferry terminal to Ocracoke Island. 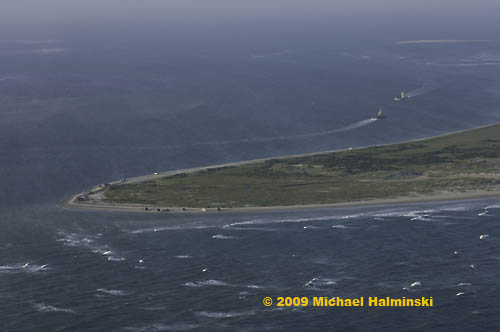 The south point of Hatteras Island at Hatteras Inlet looking to Pamlico Sound. 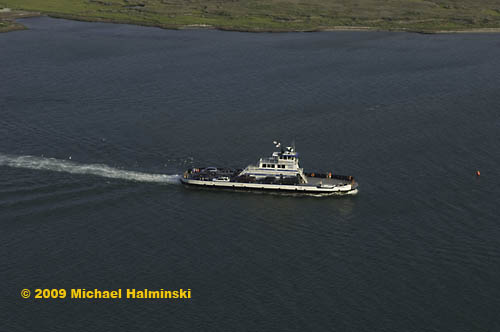 The ferry, Chicamacomico, en route to Ocracoke from Hatteras. 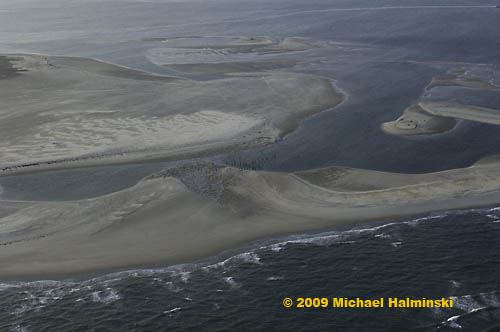 The north end of Ocracoke Island at the site of the former Hatteras Inlet                    Coast Guard Station. The station was destroyed in storms. All that remains                    are the pilings. This illustrates the lack of stability of barrier island systems. 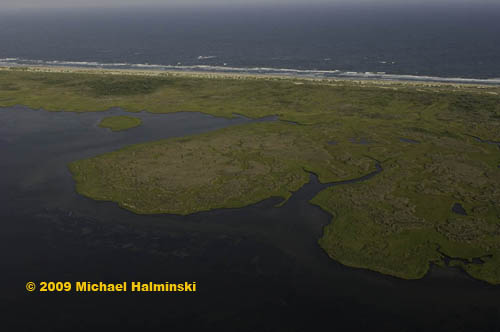 Ocracoke Island from the sound side. 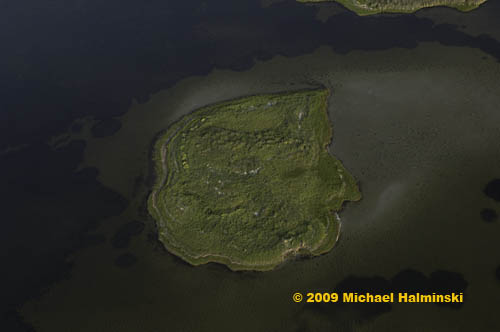 An island in the sound behind Ocracoke Island. 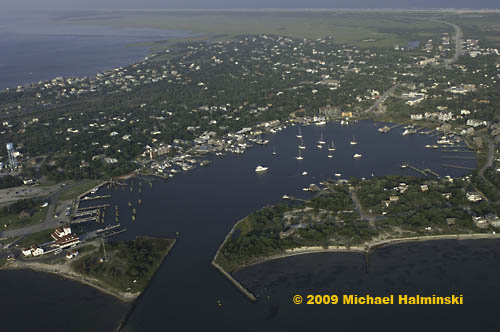 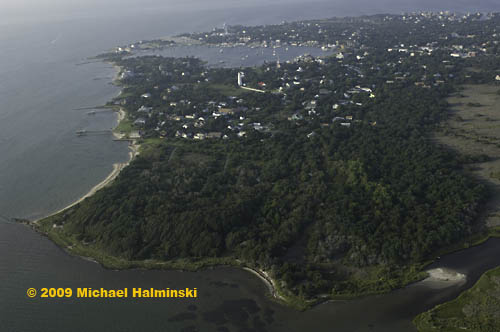 The beautiful maritime forest at Springer’s Point on Ocracoke. 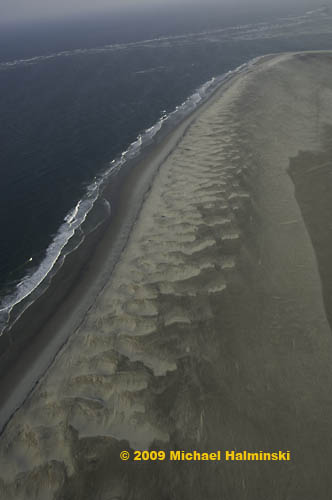 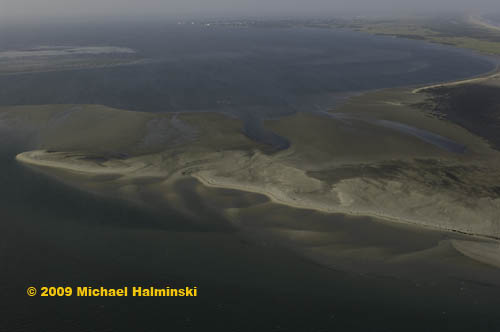 A sandbar where Ocracoke Inlet meets the Pamlico Sound. 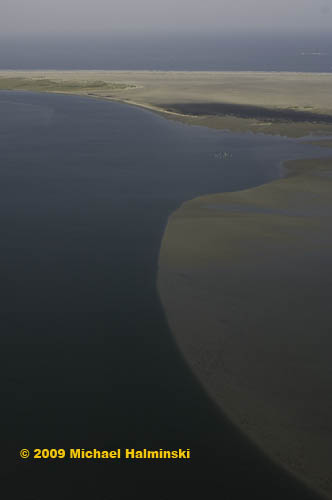 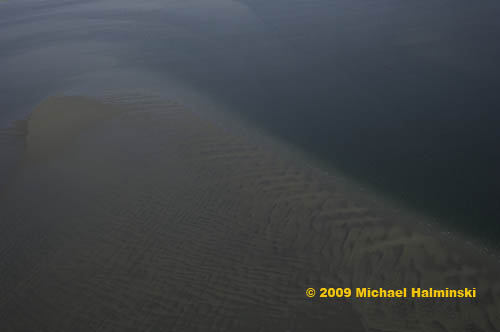 A sandbar in the Pamlico Sound near Ocracoke Inlet. 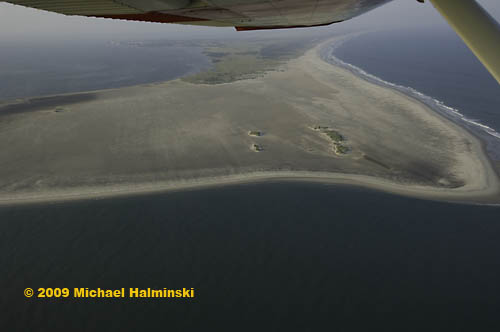 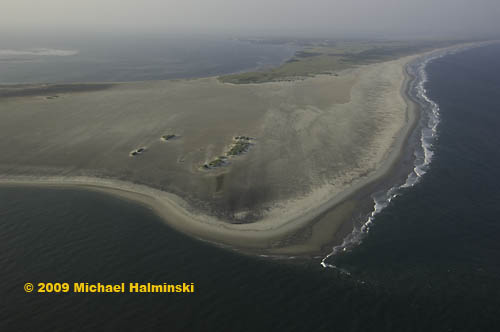 The South Point of Ocracoke in a pristine state from 1,000 feet.